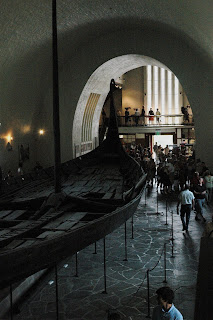 Welcome to the log of my Olavsleden Pilgrim trek. I walked the 669 kilometer "Way of St. Olaf" across Norway between July 1st and 28th of the 2009 summer. Re-established with continuous waymarks in 1997, the Way commemorates a route walked in Medieval times by the faithful seeking the aid and comfort of Scandinavian patron Saint Olav Haraldsson, Norway's King Olav II. I embarked on the Pilgrim trek, my second in Europe after the Camino de Santiago which I completed in 2007, having just been left unemployed by the disassembling of the "Conserve School", a private boarding school where I had taught history for the six prior years. You’ll see that I began the odyssey somewhat preoccupied by a conviction that my next adventure would be a “thru-hike” of the "Pacific Crest Trail" along the western American Rocky Mountain cordillera crossing California, Oregon, and Washington states. It took me days to begin writing, difficult days during which I was adapting to very warm temperatures, the overnight shelter conditions, and foreign land. With a few exceptions (identified by calendar date asterisk **), the log is the text of postcards that I wrote to family, friends, former students (and their parents) during my walk. I have hundreds of digital images that complement this record and more than a thousand similar postcards from previous travel adventures. Why Sly? "Buffalo Jump Sly", Sly for short, was my trail name when in 2002 I successfully "thru hiked" the 3,450 kilometer grandfather of all American trails, the "Appalachian Trail. Enjoy the Sly tale.

Posted by Mark Nienstaedt at 7:55 PM