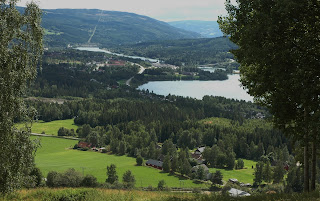 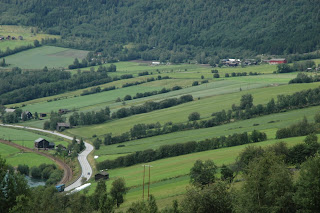 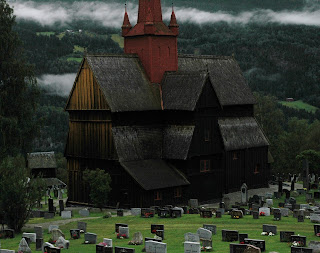 So there was this way mark post—centered in the middle of the tangled slash of a small clear cut five meters off my well trodden footpath. It was inviting me to cross the acre or two of debris ahead. Anywhere else I would have ignored it but Norwegians place a premium on hardy self reliance. This was where my pilgrim’s way would surely go. A few tentative steps persuaded me that I wasn’t actually going to cross the tree clippings jungle. Setting out skirting the cut margins, by their far side there it was—my pilgrim way re-appearing entering uncut woods. I got lost—a half hour later on.
I lose my way for a while at least some part of nearly every day. The mountain valley landscape is easy enough to read so it’s never that I’m at a loss for where to go. I’m just freelancing until the next way mark shows up. Yesterday I found … Peer Rosing-Schow (my Danish cousin). We had dinner together at a Chinese Restaurant near Ringebu. Very pleasant. I slept over night in the loft of the Gildevollen, or medieval guild hall, just down slope from the Ringebu Stavkirke. A master craftsman still does wood carving work in the hall today. Peer tells me he was named for Gynt.
Posted by Mark Nienstaedt at 7:33 PM