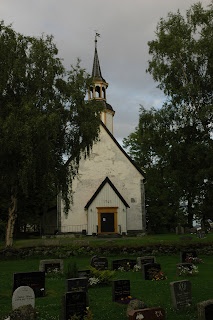 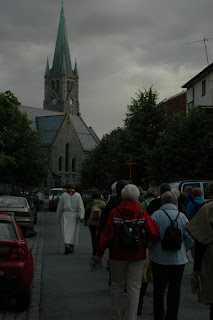 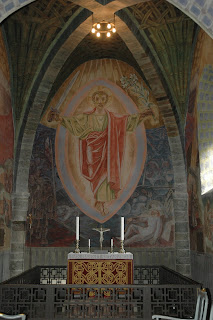 I was offered this interesting observation: Olav Haraldsson, King Olav II, who brought Christianity to Norway dying a martyr’s death in battle at Stiklestad in 1030, was really a Catholic saint, since he preceded Martin Luther and the Reformation. And for that reason, many Catholic services are moved from Trondheim's Catholic Ilen Kirke into the Lutheran Cathedral during the Olavsdagene Festival week.
So I reach Trondheim today right on schedule. At the Pilgrim Hostel, I rush through a quick succession of introductory experiences meeting pilgrim people, take a quick shower, and board a bus back out to the Lade Kirke on the margins of the city. It’s Olavsok, the eve of the feast day of the Scandinavian patron saint and all clerics in the city are on duty.
Beginning at 8 p.m., people assemble in churches on the periphery of the town. After a prayer and a hymn, they begin walking into the Cathedral in the gathering twilight. These processions are lead by a deacon with crucifix and ministers robed in their finest cassocks. Each procession stops at three neighborhood churches along the way into the city center for a rest, a reading, and hymn. By the time our pilgrim processions converge on the Cathedral, our numbers have swelled so that we will fill the church for an 11 p.m. high mass. An all woman choir leads the congregation through the musical liturgy. Nearly a dozen ministers, some of them women, some pilgrim ministers from foreign countries, preside. And the church remains open all night long for silent meditation and hourly devotional ceremonies. Beautiful. I take in the first of the vigils before seeking restful sleep at 2 a.m.
Posted by Mark Nienstaedt at 6:44 PM