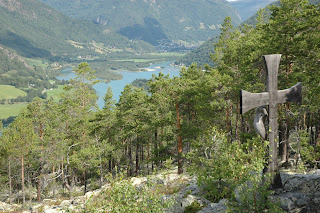 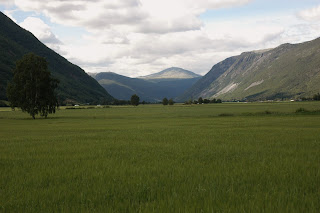 The Olavsleden, not precisely wilderness, is still a rugged natural path. It makes for an interesting Pilgrim trek. Take today. I have never been more than two or three kilometers from the “E6”, a substantial Scandinavian arterial highway. I also walked across sheep and cattle pastures (among the grazing animals) and over numerous fence stiles. And I spent a lot of time traversing brutally steep, often stony, densely forested slope. The views, when they could be had, were spectacularly beautiful walled in Gudsbrandsdal Valley with the Lågen River below that carves it deeper. I was in sight of civilization—farms, lumber mills, small communities—most of the day. But a frustrating challenge of the Olavsleden is that its track carries you into few towns (an added difficulty: Towns conveniences are often widely dispersed). When you are re-supplying as you walk, your only option is often to drop down from your lofty ridge top vista in search of a supermarket losing elevation that you will be obliged to regain. I’ve wimped out in such fashion this evening, if anything on the Olavsleden can be described as wimpy. At any rate, I’m at the Youth Hostel at Sjøa at river level. I was obliged to walk 3 or 4 kilometers of heavy E6 traffic to get here. For that I’m enjoying a shower, clean sheets on a comfortable bed, some internet time, dinner, and breakfast—and my clothes are washing machine clean. Lance is third momentarily in the Tour de France, Leipheimer is out with a broken wrist. I’ve had only my second largely (not entirely) dry day in seventeen today. The locals say the weather here (and forecast) has been mostly fair in recent days. Good thing. I go onto the sparsely populated, above tree line “Oppland” this coming week. Tough country!
Posted by Mark Nienstaedt at 7:17 PM