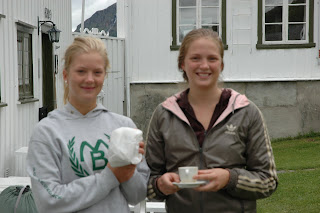 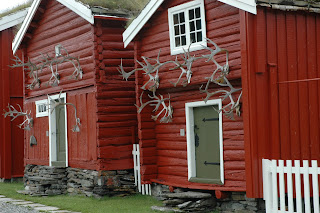 It's empty, open alpine tundra above tree line on the central Norwegian Dovrefjell “Oppland”. I was dropping down mountain mid day to visit “Kongsvold Fjellstue”, since medieval times a mountain refuge with a history of royal patrons. There they suddenly were: Two beautiful Scandinavian maidens resting on either side of my steep track. 20 and 21, a blond and a brunette, and quite charming. Faye and Maine were Swedes and sisters working for the summer at the Fjellstue, the latter christened for our New England state which her parents thought was beautifully named. These young lasses cheerfully reported that they had just finished 10 sprints up the near vertical track just below them. I was awestruck and the panoramic view from our mountain aerie was the least of it. Not skiers, the girls said they just liked to use their free time off from work to come up on the mountain and get some exercise. Eventually they showed me a “secret” shortcut down to Kongsvold, today an expensive high mountain destination. Its lunch buffet wasn’t served till 1 p.m.--still an hour away. Not to worry. Ducking discretely into the kitchen, the girls emerged with two sandwiches and coffee served on china for me. “Don’t tell anyone”, they smiled. I felt like a king. 34 km took me over the mountain top today!
Posted by Mark Nienstaedt at 7:05 PM