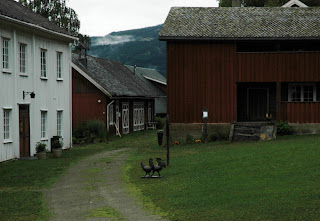 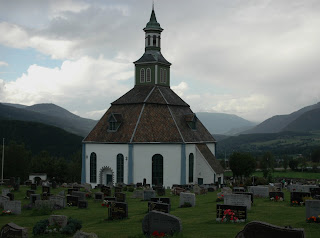 “I recom- mend it to you” is what Stig Grytting was saying. I’d reached Sygard’s Grytting, a mountain slope farm boasting the only medieval pilgrim’s loft still in existence on my St. Olav’s Pilgrim Way. Since my arrival in later afternoon, I’d observed Stig variously clad and well decked out as the German tour bus greeter, farm handyman that he is, and our white shirt, black slacked farm tour guide/dinner host. I had expected to be content merely sleeping in the pilgrim loft built before 1350 but instead I had accepted Stig’s “recommendation”: Dinner in the big house with the less bohemian guests. Audible pride, untainted by any aggressive salesmanship, told me it would be something special--three courses including lamb, farm produce, two wines, and a coffee social afterwards. The other eight dinner guests were all Norwegian. The 800 Kroner (>$100 US) that ended up covering my simple loft bed, dinner, and breakfast was well spent. I’m nearing the half way point of my pilgrim trek today, about 325 kilometers to go. It’s encouraging that I feel pretty good. I go above tree line in coming days which has me nervously anticipating. I passed the Octagonal Sor-Frøn Kirke (circa 1792) today. The largest in this Gudbrandsdal valley, it can seat 1,000 people.
Posted by Mark Nienstaedt at 7:30 PM