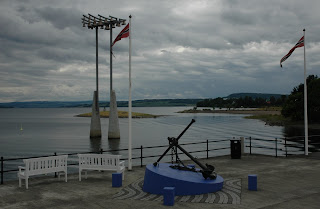 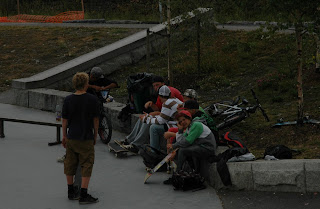 I am, courtesy of the creatively destructive capitalist forces of educational infrastructure adjustment, now unemployed and, of “necessity”, the purchaser of a powerful Hewlitt-Packard laptop. It has an on board web camera and I could visit you on tele-audio-vision any time via “Skype” for free--Ah! Our global world at fingertip command.
I was enjoying the comfort and shelter of the Hamar Vandrehjem Hostel three days ago drinking coffee in its cafeteria when I realized the man communing with his wife via Skype two tables away was doing so speaking Spanish. When he concluded, I struck up a conversation with him and discovered he was from Uruguay. His wife also at work in Europe wasn’t in South America either. His vehicle suggested he was “in elevators”.
I’m about 250 kilometers into my pilgrim trek across Norway in Lillehammer tonight. It is beautiful country I am walking through. I’m getting into Sigrid Undset country now, she of Nobel Literature Laureate fame for her Kristin Lavransdatter trilogy. I suspect I will cross the route of a Norway traversing bicycle trip I made with my younger sister Lisa in the early 1990s at Sel, a town where a statute of Kristin graces a local church yard.
Posted by Mark Nienstaedt at 7:36 PM