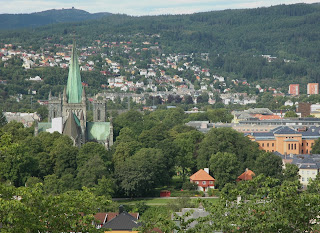 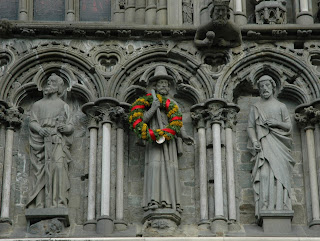 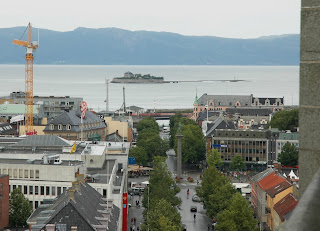 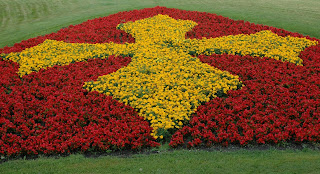 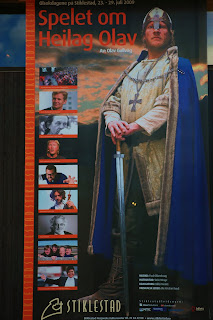 It wouldn’t quite be accurate to say that Olav Haraldsson died a martyr’s death. In fact, he went down sword in hand as a good Viking should. In a nutshell, he had gone wrecking Viking havoc abroad from Norway as a young man just after the first Millennia and returned a wealthy man. Empowered, he set out to unify the country till then fractured into the fiefdoms of local warrior chiefs. Having converted abroad, he also sought to impose Christianity by force. In 1028, the Swedes, seeing the unrest he was generating, instigated a revolt to exploit it. In 1030, at Stiklestad, 100 km north of Trondheim, the Swedish led malcontents triumphed and Olav died in battle. His body, interred on the banks of the Nidelva River at Trondheim “Nidaros”, soon became the focus of a pilgrimage. Miracles followed, Olav became the rare Scandinavian saint, and hindsight left petty chiefs unifying a country Christian and not dominated by Swedes. There is a choir/organ loft over the rear of the Nave of the “Our Lady’s” Vor Fru Kirke in Trondheim. The area at the rear of the church that it overhangs has no pews. Instead it has chairs, tables, and volunteers who staff there a continuously open coffee house. It’s not even commercial as you recognize the value of your coffee and biscuit by donation only. People come in to read papers, chat, and just rest weary (tourist) feet. Meanwhile, undisturbed, others worship elsewhere in the church. I think other churches in Trondheim host guests this way too. I love this. It brings cold architecture back to life. I’ve reached the end of my Pilgrim road today returning to Trondheim from Stiklestad. I’ve turned my Pilgrim’s scallop shell around symbolizing the end of my journey. I head for Oslo and home.
Posted by Mark Nienstaedt at 6:39 PM