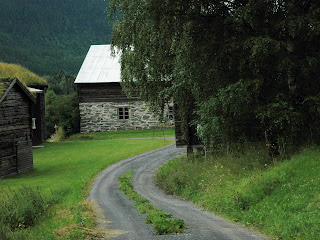 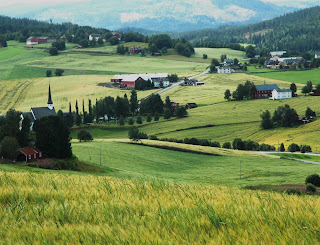 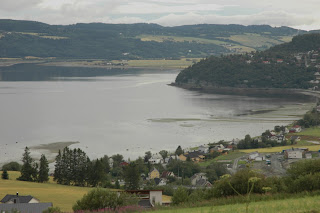 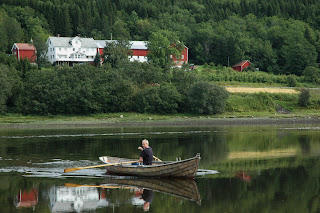 My last pilgrimage day brought me to the banks of the Gaula river. You telephone from Øysand camp ground, a few kilometers before you reach the river and alert the ferry man. For 50 NOK ($8US) he paddles a row boat from the Sundet farm on the opposite bank to come to get you to bring you across. This service was available historically at this spot for pilgrims in the medieval period and has been re-established for modern pilgrims a year or two ago. Jon Wan the ferryman gave me a brief tour of his farm (50 acres of wheat and sheep), pilgrim "Herberge", and introduced me to his period costume dressed wife (they had overnight pilgrim guests depart just before my arrival). Jon had been to Mercer, Wisconsin, and Duluth,Minnesota. They say that in the mid 19th century half of the population of Norway emmigrated to the United States and most Norwegians today have relatives in the American Midwest. From the Kleivan herberge, I walked 26 km into the Nidaros Cathedal today. It was enjoyable that even on my last day into a fair sized city, I walked most of the day through natural landscapes on forest track. Past a ski jump among other things. At 4:30 I arrived at the Cathedral, crowded with tourists, and retreated to the quieter Nidaros Pilgrims hostel behind the church.
Posted by Mark Nienstaedt at 6:49 PM